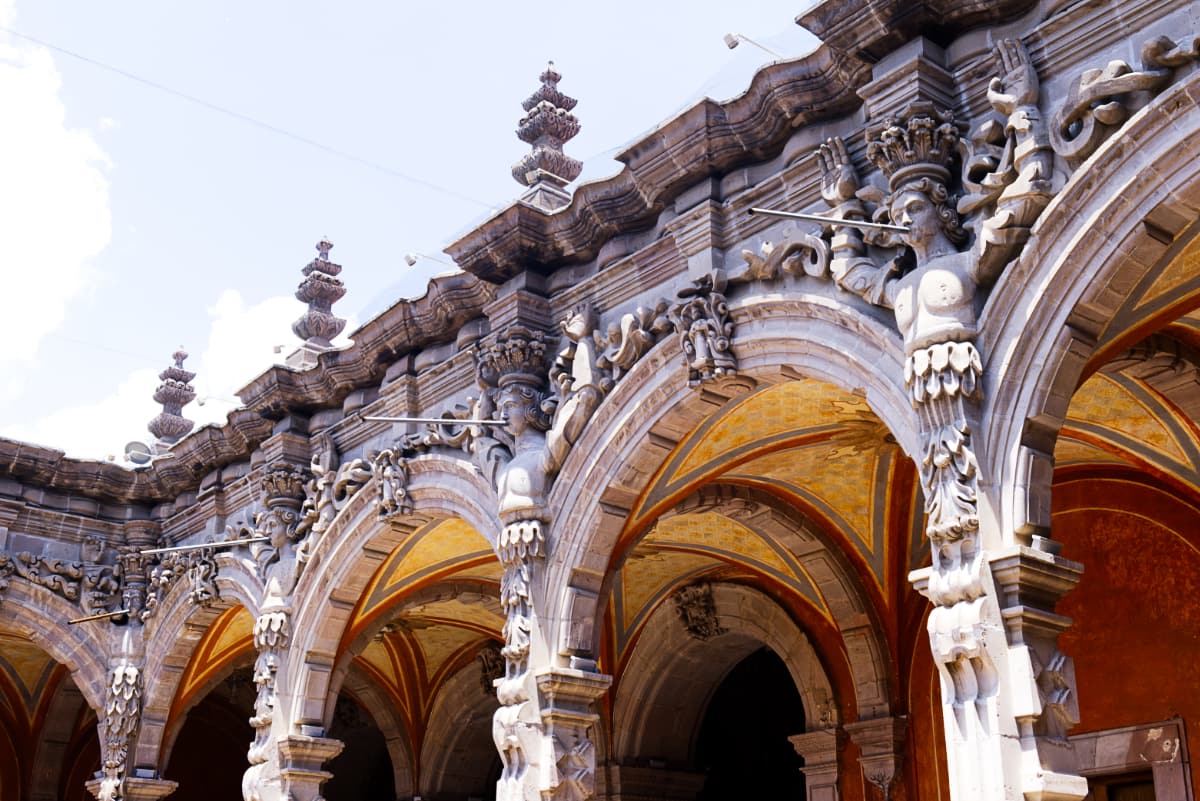 Walking through Queretaro, Mexico, the historic buildings and their intricate details almost give the sense of walking through a museum.

And so you may find yourself just as mesmerized by the architecture of the museums in Queretaro as the exhibits inside.

Queretaro’s history of being a strategic point between Mexico City and the silver mines to the north also plays a role in the interest of these Queretaro museums. But there’s more variety here than just dry history.

Let’s check out the details of each of these Queretaro museums.

Walking into the courtyard of this former convent literally took my breath away.

Built in the 1700s, the Spanish Baroque style architecture is beautifully represented in the richly ornamented details. The pink quarry stone columns arch across to frame the two-level covered walkway that leads to the various rooms of this Queretaro museum.

The permanent exhibit is a collection of paintings and sculptures from the 17th century through the middle of the 19th century. As well, there are several temporary collections, most of which I found a bit odd when I visited.

Regardless, I would consider this one of the top museums in Queretaro for the architecture of the convent alone.

Museum of Contemporary Art of Queretaro

I find the art on display at most contemporary art museums is often a mix of styles, some of which don’t resonate with me. And such was true at Queretaro’s Museum of Contemporary Art.

As I walked through the lower half of the museum I was a bit underwhelmed until I became mesmerized by the colorful murals encompassing the staircase.

I took this as a promising sign and headed upstairs.

Once on the upper floor, I found an incredible temporary collection of photographs from indigenous ceremonies throughout Latin America and the Caribbean.

While you may find some of the rotating exhibits not to your liking, the museum itself is large and varied enough to find plenty to admire.

This museum in Queretaro is definitely worth a visit, perhaps more than once.

Located in a fully renovated 17th-century house, this Queretaro museum takes you through the varied history of the calendar from different cultures in different parts of the world.

I found the history of the creation of calendars among different cultures quite interesting. However, all of the information is in Spanish. And there’s a lot to read, even for native speakers.

So I followed along as much as I could, though I often found myself admiring the gorgeous pasta tiles that flowed from one room to another.

Do you love history? You’ll want to check out the pueblo magico of Taxco, Guerrero.

The museum is extensive and continues past the manicured courtyards to showcase rooms full of old calendars.

If you have the time, plan to rest in one of the courtyards with a book or use the value of your entrance fee in the restaurant located in the back garden.

The final rooms display the lithograph process that was initially used to print calendars as well as more modern techniques.

Mucal Calendar Museum Details
Location (Map)
Hours: Tuesday – Sunday 10 am – 6 pm
Cost: 40 pesos which you can use in the restaurant

This center houses a small museum and artisan market in an effort to help preserve the identity of various indigenous communities.

The large map at the entrance details the location of different communities throughout the Americas. I found this inclusivity quite refreshing.

Oh, and it’s housed in an older building in centro Queretaro, so don’t forget to look down and admire the floor tiles.

The museum is split into six rooms all with varying themes. For instance, the first room displays pieces such as clothing, toys, and pottery that are representative though not necessarily ancient (most date to the 1980s and 1990s).

The second is a photographic display of different communities. There’s also a room full of artisanal dolls from all over the country, with an emphasis on Otomi dolls.

Overall this is a small but interesting museum in Queretaro. Afterward, you can check out the market and support local artisans.

With over 3,000 insects on display, this is a bug enthusiast’s dream museum. But even if you aren’t into bugs, I recommend checking this place out.

The museum was created by entomologist, Jesús Puente Casilla, who has been collecting these specimens for over 40 years.

His goal is to bring awareness of the importance of all living creatures and the role insects, in particular, play in our food chain.

He hopes that by educating others, they will realize that every living creature has an importance on earth.

Do you love museums? Check out my favorite museums in Merida, Mexico.

The insects are categorized by type and span the globe from Latin America to Asia. Some of the highlights are the praying mantis collection and the large, iridescent butterflies from South America.

In addition, there is a collection of live tarantulas and other bugs in glass aquariums. You can opt to interact and have your picture taken with them.

Completed in 1904, this English-style train station is one of the most notable in Mexico. The building itself doesn’t feel like it’s over 100 years old. It’s timeless and in remarkable shape.

Walk down the wide platform to the two waiting rooms. They display a few historical pieces, including the original benches for travelers to sit on. In addition, at the end of the platform is a photo opportunity with a small rail car.

But the real gem is upstairs.

The first two rooms upstairs house a rotating art exhibit which I didn’t find particularly fascinating. But the last room has an entire setup of the train station and railroad tracks through Queretaro.

It traverses past the aqueduct and over the mountains, going as far as San Juan del Rio, a nearby town. I’m not a model train fanatic, but the amount of detail here is impressive.

And I’m further convinced that the men whose job it is to make sure everything is running smoothly, have one of the best jobs in Mexico.

The entire museum is free, however there was a donation box for the model train room.

Remember when I said some of the most interesting parts of Queretaro museums are the building itself? For me, this is one of those places.

This museum showcases the state of Queretaro through time, beginning with the Prehispanic cultures that settled in the area.

It then progresses from the Spanish-imposed social and religious orders through Queretaro’s role in Mexico’s war of independence.

There’s also a room that takes you through the history of the building of the convent in which this Queretaro museum is housed.

There’s lots of information here, though it is all in Spanish. As a result, it was the least interesting museum in Queretaro to me.

However, it’s also located in a beautiful building with a central courtyard and long arched walkways.

In addition, there is a mesmerizing replica of five incredibly intricate Mexican church facades. This was the highlight of the museum for me.

Mystery surrounds this 17th-century mansion that was inhabited by a couple from the city of Zacatecas, hence the name.

The tour begins with a short video presentation (English or Spanish) which tells the story of the couple and the mystery.

After, you’re allowed to tour the rooms of the house which are furnished by a permanent collection from a Mexican collector. While the furnishings are not original to the house, the pieces are from the 17th through 20th centuries.

The room that stood out to me was the collection of clocks, including one that is a replica of the Cathedral de Reims with gold and lead finishes.

Don’t miss the opportunity to see the views from the top. The last room on the right leads you up two flights of stairs to the mirador. Located on the rooftop it has decent views of the city and nearby churches.