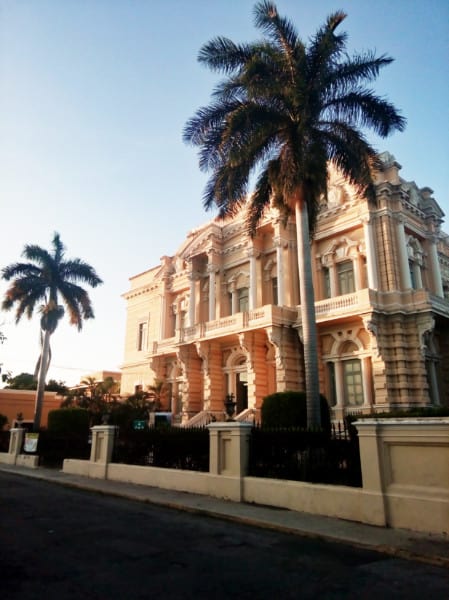 One place you can soak in this culture is through the various museums in Merida. The city has done a wonderful job of curating these museums and other cultural events that occur throughout the week.

The best part is that many of these Merida museums are free! Whether you are escaping the heat, the rain, or simply looking for something to do, they are a great educational escape.

I’ve created this list of the 7 best museums in Merida, Mexico. Read this guide for more things to do in Merida.

Folk Art Museum of the Yucatan

This Merida museum gives you a glimpse of Mexico through its artisans. This small, two-story house displays folk art from different artists throughout Mexico. The museum houses indigenous pottery, textiles, jewelry, and more.

If this type of art interests you, you’ll also want to check out one of the best things to do in Valladolid – Casa de los Venados.

MACAY is the best museum in Merida to view the works of contemporary Mexican artists. Featured is a permanent exhibition by Fernando Garcia Ponce. Located in a colonial building across from Plaza Grande, this museum is also a great escape from the heat when you are exploring Merida.

Also located across from Plaza Grande, Museo Casa Montejo is a restored home built in the 16th century by Don Francisco de Montejo – the Spanish conqueror of the Yucatan Peninsula.

The outside of the building is a piece of artwork in itself. It features plateresque, an ornate surface decoration that was common in the early years of Spain’s Golden Age.

The four rooms on permanent display showcase the furnishings of the 19th and 20th centuries in Mexico. And the gallery has a rotating art exhibit.

Do you love museums? Check out the top museums in Queretaro, Mexico.

Constructed in 1892, the Governor’s Palace is home to the Yucatan’s executive government offices and a small tourist office. But the real attraction is located on the second floor. Here you’ll find the murals and oil paintings by the local artist, Fernando Castro Pacheco.

These large pieces of artwork depict the history of the Mayans and their interaction with the Spanish conquistadors. We visited after watching the Mayan Ball Court Game and the night atmosphere made the paintings even more vibrant and dramatic.

Located near Mercado Lucas de Galvez, the City Museum of Merida tells the history of the city. The permanent exhibits are displayed in four rooms and tell the story of Merida from Mayan times to the present day.

Regional Museum of Anthropology of the Yucatán | Museo Palacio Canton

This Merida museum is located in one of the most iconic buildings in Merida. Located on Paseo de Montejo, this refurbished mansion houses an extensive exhibition of local Mayan history. They also host a rotating exhibit a couple of times per year.

In true Merida fashion, this cultural space also hosts regular events which you can check on their Facebook page. Most popular is the presentation of Yucatan Trova.

Did you enjoy this guide to the best Museums in Merida? Pin It!