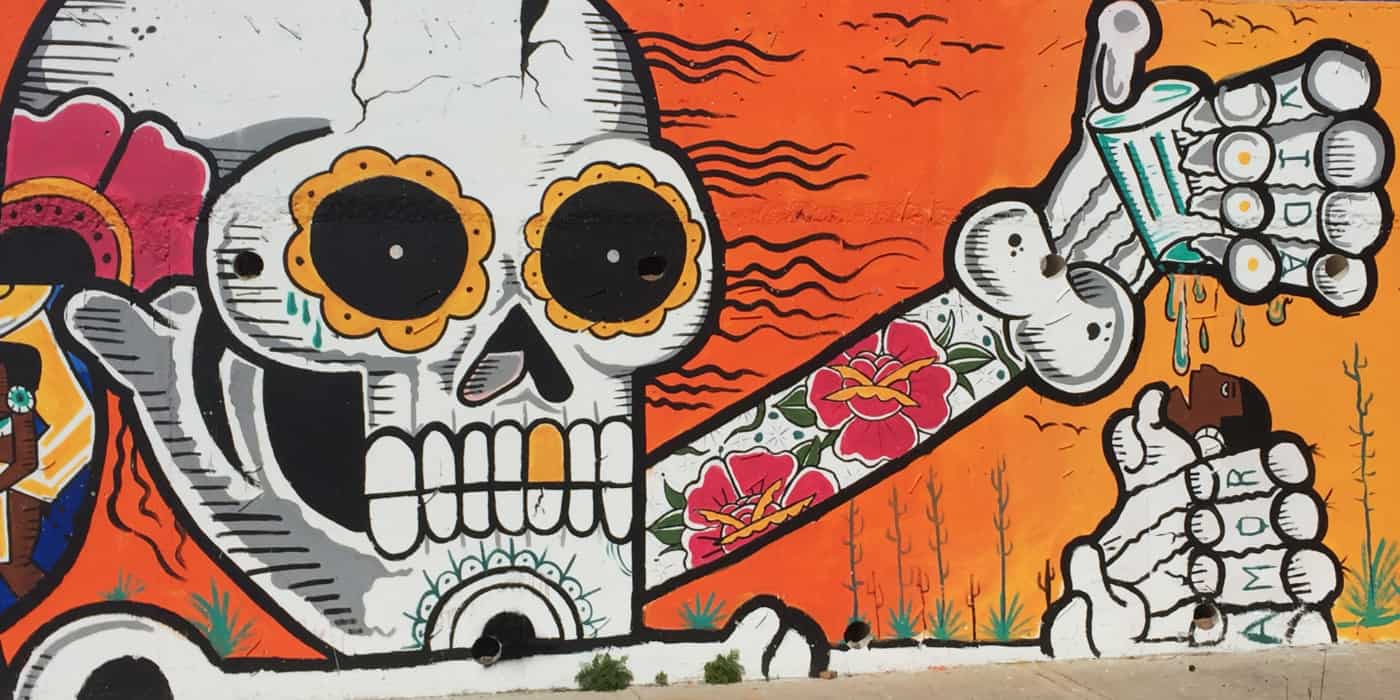 One of the most important things to know about Day of the Dead is it’s a family affair. A time for reflection of ancestors that have moved on to the afterlife. Stories of gratitude and humor are retold in a celebration of life. Large family meals are prepared ritually, involving all family members in an aspect of decoration and food preparation.

Whether you’re religious or not, there is an intensity in the air while you stroll through the brightly decorated cemeteries, each grave lit by colorful lights and candles. The parades and festivals leading up to this holiday will leave you with a lifetime of stories.

Here’s our favorite facts about Day of the Dead you need to know.

Death is celebrated in Aztec culture

Day of the Dead in Mexico is not a time of mourning, but a time of celebration. Before the Spanish forced Christianity on the Aztec and other tribes of the Nahuatl, death is not to be feared. In fact, they believe when you cry over the dead it creates a treacherous journey for the deceased by making the path slippery.

It is not Mexico’s Halloween

Dia de los Muertos, an ancient ritual dating back more than 3,000 years, was originally a month-long festival in August that coincided with the harvest of maize. During Day of the Dead, flowers and offerings adorn the altar to celebrate the spirit’s long journey navigating the afterlife.

Day of the Dead is celebrated over two days

Families spend the night in the cemetery

A traditional Day of the Dead celebration is spent in the cemetery, telling stories and celebrating the life of the deceased. Families bring food and drink to accompany their evening in the cemetery. Tall candles light the decorated graves while the smell of incense permeates the air, creating a rich and vibrant scene.

Maintaining the graves is very important

Each year around Day of the Dead, the graves are cleaned, repaired, and some years painted. Maintenance of the gravesite reflects to the spirits that they are welcome.

La Catrina was created as a political statement

José Guadalupe Posada created La Calavera Garbancera in 1912 to protest a trend of pre-revolution women lightening their skin with makeup and adopting a European style. Calavera meaning ‘skull’ and Garbancera, a nickname to describe someone ashamed of their heritage.

In 1947 Diego Rivera made the image popular when he used it in his famous mural, Sueño de una Tarde Dominical en la Alameda Central (Dream of a Sunday Afternoon Along Central Alameda) and renamed La Calavera Garbancera to La Calavera Catrina. It has become Mexico’s most iconic Day of the Dead skull.

Altars are created to honor and welcome the deceased

One of the most important Day of the Dead traditions is to build an altar in memory of the deceased. A photograph is the centerpiece, surrounded by flowers and candles, with food and drink offerings for the dead.

Ofertas range from fruit, sugar skulls, and hot chocolate for children to tequila, cigarettes, and favorite foods for adults. Providing food, water, and entertainment helps the spirit’s journey through eternity.

Orange marigolds are the Day of the Dead flower

Flowers are an integral part of festivals in Mesoamerica. Marigolds are often referred to as flowers of the dead. Lining the path from a home’s entry to the altar, the bright color and strong scent of marigold petals help guide the spirit to the offerings.

Incense helps guide the spirits to the altar

Incense plays an integral part in guiding the dead back and helping to ward off evil spirits. Made from the sap of the Copal tree this incense is used year-round in the Catholic church. During Day of the Dead, you will find it in large quantities in the markets and street vendors.

These banners, cut into Catrina’s, skeletons, and flowers, are found stretched over altars and crossing the streets in every Mexican town. The Aztec created the original papel picados cut into the shape of spirits.

Each Fall, Monarch butterflies migrate to the states of Mexico and Michoacan where the Aztec believe the butterflies are their ancestors’ spirits returning home. Today, butterflies are incorporated into Day of the Dead decorations.

Day of the Dead traditions vary by region

Celebrations for Day of the Dead vary by region in Mexico and Latin America. In the Yucatan Peninsula, the region celebrates Hanal Pixan – a Mayan term for Day of the Dead. In the town of Pomul, Yucatan the local tradition is to clean the bones of the deceased.

A white blanket embroidered with the name of the deceased is laid on the ground upon which the bones are unearthed and dusted off. They use this as a time to talk to the deceased, updating them on their lives.

Traditional Day of the Dead Food

The shapes of the sweet ‘Bread of the Dead’ differ depending on regions. Some Day of the Dead bread is dusted white to represent bones, while others are decorated with colorful flowers and stems made from a flour paste and food coloring.

Calabaza en Tacha, or candied pumpkin, is made from the large green skinned variety. It’s boiled down with orange, cinnamon, and traditionally sweetened with honey to form a syrupy glaze, though sugar is typically used now.

The word Mole comes from the Nahuatl word Molli, meaning sauce. There are hundreds of different types of moles varying from town to town. In Puebla and Oaxaca states every town has a molinero, where personalized mixtures of spices and ingredients are freshly milled together.

Originally made using amaranth seeds, sugar skulls have been around since 1630. The small sugar skulls represent children that have passed, celebrated on November 1st, and the large skulls are for adults, observed November 2nd. Often the name of the intended individual is printed on the forehead.

Reserved for royalty during the Aztec reign, powdered chocolate is mixed with water or milk and sweetened with sugar to make a chocolatey drink for children.

You can’t forget the Day of the Dead beverages for adults – mezcal and tequila are typical offerings left on the altars for adults, as are cerveza and whiskey. Water is another important gift for the soul of the deceased as it has traveled a long way.

In Aztec culture it was not your status in life that determines where your soul goes after death, but how you die. Those who drown, are killed by lightning and sacrificed children go to the first level of heaven where Tlaloc, the god of rain presides. While most find themselves in the underworld after death, it is significant to find oneself in one of the paradises of heaven.

The God of Rain – Tlaloc

Tlaloc, is the oldest god in the Aztec religion, dating back to before the creation of the Aztec empire. Most human sacrifices are carried out for this god.

There are multiple levels to the afterlife

13 Heavens and 9 Underworlds. Each level is overseen by no less than two gods – one male and a female counterpart. Heaven is a paradise, but the occupants of the levels of heaven still have responsibilities, such as helping to guide the sun across the sky.

Each level of the underworld contains a new obstacle the soul must complete in order to find rest in Mictlan, the final resting place for those in the underworld.

It takes four years for souls to successfully reach Mictlan

After four years of overcoming many obstacles, the souls finally reach Mictlan. Some accounts keep the souls of those who have reached Mictlan there for the rest of eternity, but there are other scholars who believe that after eight years you are reincarnated.

You must experience Day of the Dead

Day of the Dead should be on everyone’s bucket list. The decorations, foods, and smells are magical. There is a festiveness in the air that makes it a more important holiday than Christmas (Feliz Navidad). The liveliness of the community, the expansion of the mercados spilling into the street as vendors sell their specialty wares, and the ancient celebration of death are not to be missed.

Have you experienced Day of the Dead? Tell us about it in the comments!

Read Next: Searching for Flamingos in Celestun Mexico

Did you learn new facts about Day of the Dead? Pin it!