This article may contain affiliate links. You can see our disclaimer here.

Flamingos have always been a fascination with their long, backward bending legs, graceful curvy necks, and a beautiful pink color that results from the crustaceans and plankton they consume. Like many, I had only seen pink flamingos in captivity. But what if I told you there is a place in Mexico’s Yucatan Peninsula where you can see thousands of flamingos? In the wild!

Celestun, Mexico is a small fishing village on the Gulf Coast of Mexico, 60 miles southwest of Merida. While there are long stretches of sandy beaches, most people visit to go on a Celestun flamingo tour. Surrounding the town is the Celestun Biosphere Reserve, unique for the flocks of flamingos that migrate to the mangroves in the winter.

Celestun Flamingo Season: When is the best time to see flamingos?

Celestun flamingo season is November to April and the best time to see flamingos in Celestun is December-February. I visited Celestun in late October, knowing it was just before the season started. But I was lucky and there were still a few hundred flamingos in the area.

Be sure to start your tour early. The earlier the better to see the most birds and enjoy the tranquil environment, but the latest I recommend to start your flamingo tour is 9 am. 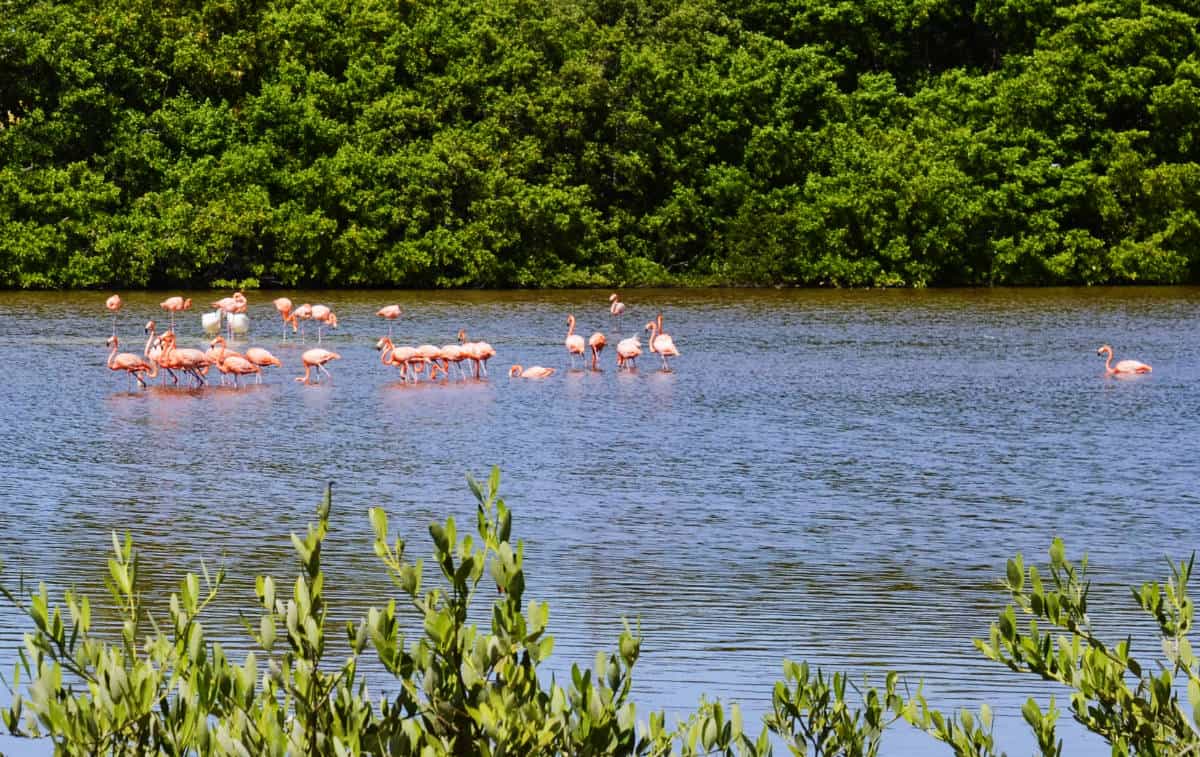 Do I need to book a Celestun Flamingo Tour?

The flamingos in the Yucatan split their time mostly between Celestun and Rio Lagartos. Which one you choose depends on the time of year. The flamingos stay in Rio Lagartos from April-October for mating season. Then they migrate to Celestun from November-March for nesting season.

How Do You Get to Celestun, Mexico?

There are three options to get to Celestun from Merida. You can rent a car, take a public bus, or hire a tour that includes transportation and a flamingo boat tour.  The drive from Merida to Celestun is about an hour and a half on a paved road west of Merida, towards the Gulf Coast.

Drive to Celestun from Merida

Renting a car is my preferred way to travel in the Yucatan as it leaves you free to explore along the way. However, other than a couple of small towns near Merida, there’s not a lot to see on the drive to Celestun. To get to Celestun from Merida, travel west on Highway 281. The road narrows as you get closer to Celestun. After you cross the bridge it will be just a few more minutes until you’re in the heart of this sleepy little beach town.

Take a bus from Merida to Celestun

A bus from Merida to Celestun costs 56 pesos each way, making it a great option for budget travel to Celestun. The bus leaves on the hour from 5:00 am to 8:00 pm from the Noreste Bus Station at the corner of Calle 50 and 67. The bus will drop you off in town, close to the beach where you can find a tour unless you ask to be dropped off beforehand. Keep in mind, the bus will take longer than driving yourself as it stops for passengers getting on and off.

There are several Celestun tours in Merida that will pick you up at your hotel, provide an English speaking guide, and drive the 60 miles from Merida to Celestun. There you will board a boat that takes you through the mangrove forests to see the flamingos and other wildlife. Many tours also include time to spend at the beach. I’ve selected the best Celestun tours below. 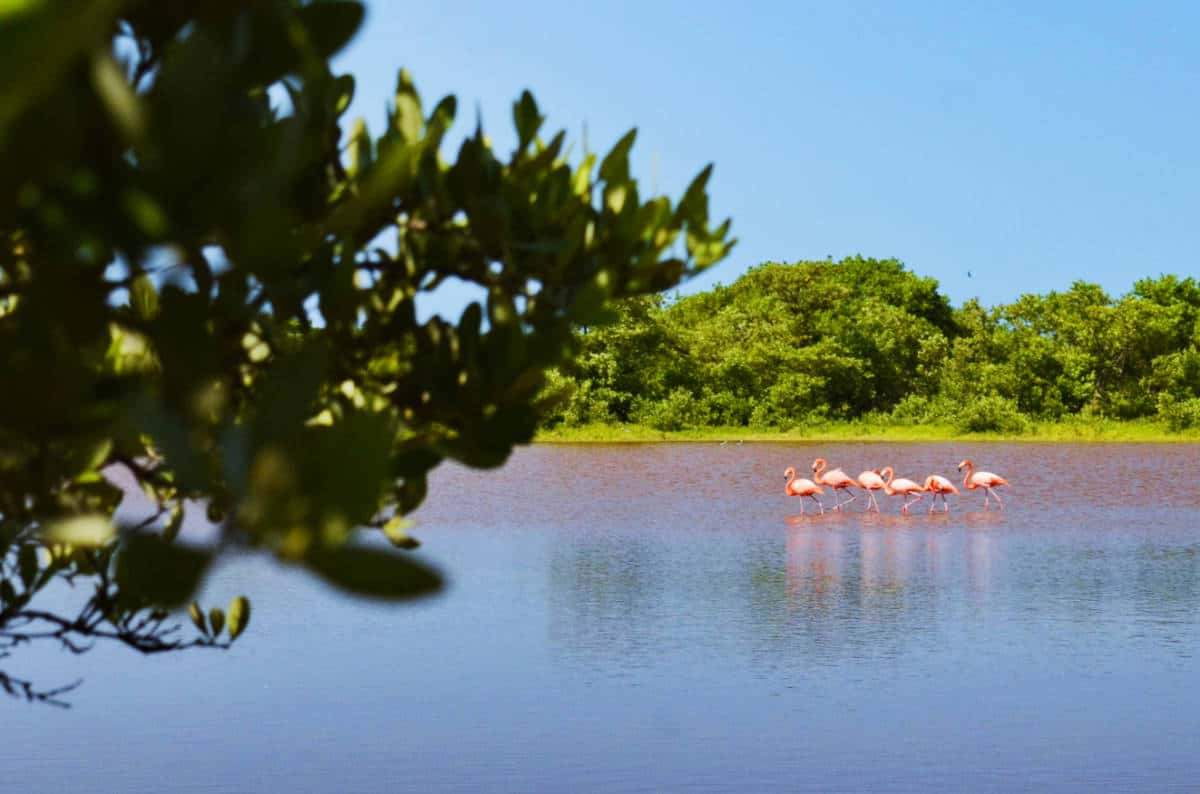 I knew I wanted something different in a flamingo tour. There’s nothing wrong with a traditional tour that takes all the stress out of planning and arriving at your destination, but I had a friend visiting and wanted to it to be special. So I found the group Mangroves of Dzinitun on TripAdvisor, with a rating of 4.5 stars. I was drawn to this Celestun flamingo tour because of the work they are doing to restore the mangroves as well as the local feel it provided.

As you drive into Celestun, the sign for this tour is easy to find, but as I said, October is not peak flamingo season in Celestun, and I should have known to book ahead. When we arrived there was no one to be found, but luckily the large sign at the boat launch included a phone number. We called and were able to manage a conversation in a mix of Spanish and English. Our tour guide, José arrived about 10 minutes later and was ready to go.

As you arrive to Celestun, after you pass the bridge, look for a hand-painted sign on the left that reads “Manglares de Dzinitun”. Follow the residential dirt road until the road curves to the right and you see the second sign for the flamingo tour. Click here for the exact location on Google Maps. If you decide to take the bus to Celestun, you can ask the bus driver to drop you off at the first sign. From there, walk 5 minutes along the dirt road to the second sign and meeting point.

To schedule this tour ahead of time, send Jose a Whatsapp message +52 999-645-4310. If you’re not fluent in Spanish you should use Google Translate, though I believe his English is also improving.

Read Next: 15 Fabulous Things to do in Merida, Mexico

How much does a Celestun Flamingo Tour cost?

José quoted 1000 pesos for the three of us to take a private tour. It was a little more dinero than I saw on TripAdvisor, but I factored in inflation, the fact that I’m terrible at negotiating, and knowing it supports a great organization that is restoring the mangroves.

We agreed to the price and we were promptly on our way down a small trail to the canoe. Once in the canoe, we launch down a small stream that quickly opened up into a large lagoon where we spot several flamingos.

EDIT: I reached out to Jose to confirm the pricing, which is now 1700 pesos for a Private Tour. I still think it’s worth it to support this group and their efforts, as well as for the unique local experience.

Paddling Through the Mangroves

José slowly paddled us through the lagoon, allowing us to admire the surroundings and take photographs of the flamingos. Then he guided us through a narrow waterway into the mangrove swamp. Inside the mangroves, a whole new world emerged.

The beauty immediately surrounded us as the sun trickled through the canopy of branches in the thickly forested swamp. The wildlife made itself immediately present, and we couldn’t help but keep silent and take in the sounds of the paddle gently hitting the water and the numerous calls of the birds that inhabit the mangrove.

After about fifteen minutes of stunning views and silence, we arrived at a fork in the water where hundreds of snowy egrets were rooting in the shallows for food. Though we were moving slowly the egrets took flight ahead of our boat.

For the next half mile, the egrets flew under the limbs of the forest only 10-20 feet off the water and always staying 50-100 yards in front of our canoe. Seeing their graceful bodies move in complete unison was magical. I’ve never experienced anything like it. 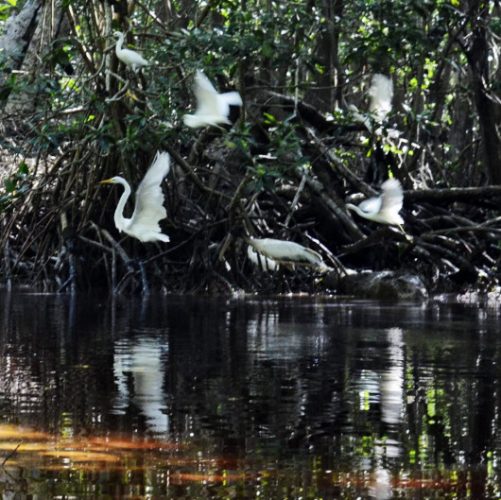 On this tour, we saw flamingos, Yucatan Jays, woodpeckers, boat-billed herons, tiger herons, hummingbirds, orioles, hawks, eagles, and cranes. This is only a handful of the beautiful birds we saw during our tour of Celestun. There are over 300 species of birds that call this Yucatan mangrove home.

Restoration of the Celestun Biosphere Reserve

José speaks a little English, and I’m still learning Spanish, so it was sometimes difficult, but we were able to understand him, and he was able to answer all of our questions. During the last 30 minutes of the 2-hour flamingo tour, José explained the importance of the mangrove ecosystem.

The amount of work this organization has done to restore the mangroves over the last 15 years is impressive. In 2004 a hurricane leveled the already depleting mangrove forest. The flamingos went away, and so did the tourism revenue.

The community knew they had to come together and make changes to rebuild and protect their mangroves. Today you can see new areas of growth and they are expanding further on those efforts to make sure the next storm won’t level the precious mangroves again.

Have you seen flamingos in the wild? Tell me about it in the comments! 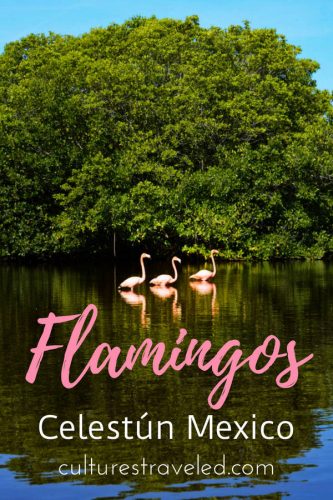 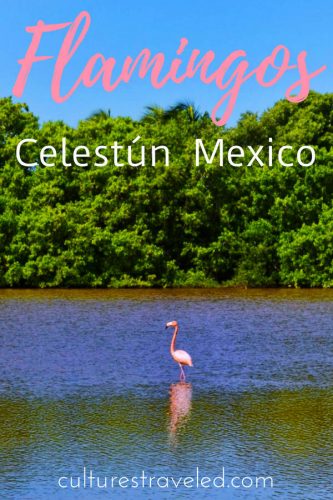 15 Fabulous Things to do in Merida Mexico

Great article, heading out to Celestún soon to check them out 🙂

Thank you! It really was one of my favorite things to do in Mexico. You may not see as many this time of year since they move to Rio Lagartos to nest in the Spring, but the mangroves are still full of birds and there will be some flamingos in the area. Enjoy!

Hi! I'm slow traveling. The kind of travel that allows you to immerse yourself in the local culture, make new friends, and experience new traditions.

Come explore with me!

10 Hot Springs in Colombia You Need to Visit

Guatape, Colombia: A Getaway from Medellin

This website uses cookies to improve your experience. We'll assume you're ok with this, but you can opt-out if you wish. Accept Read More